They just keep showing up!!!!! Although the best part of the season had generally been during this week, this year the peak came early on. The peak may be over, but the fish are continuing their march upstream. I met up with Damon and Richard today, for a little bit of fishing. We got into fish from the get go. We all got into fish in the first 2 runs we fished. Damon and I both landed 2 fish today, and I do believe he may have hooked one more fish than I did today. (â€œCrapâ€). I can’t let that happen again, it’s bad for my repâ€¦ As a total for the day, I am just going to say we had a great one again. Water is up just a bit after the rain this week, but will be dropping quickly as the temp. rises, and the sky’s clear. The fish are turning color now, and some seem to be beat up a bit. This is mainly from fighting with other fish, and beating their way upstream in low water conditions. Here are the pics. I don’t know why, but I only have pics of a few fish. My friend did not send the pics last night that he took, so only a couple, but some good vids for you though. 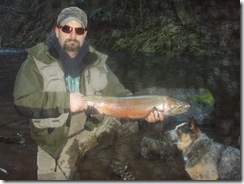 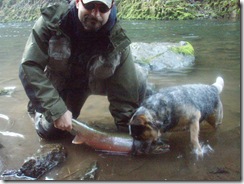 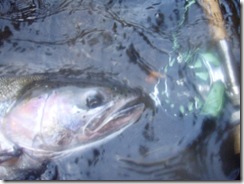 1 thought on “Great to still have fish coming!”