Ok the Sockeye have really started to hit the Situk River, but most are smaller fish. This may be contributed to the commercial nets just being in the river for 3 days. For the most part the smaller fish can swim through the mesh in the net, where the bigger fish get caught up. Matt and I walked up from the lower end of the river today with three clients, and came across some nice groups of fresh sockeye.The Yakutat Lodge clients were able to get their limit of 6 fish each within 6 hours.

All Sockeye caught in the Situk must be hooked in the mouth, if they are not in the mouth, then they must be released immediately and unharmed. If you know you have a fish snagged, then try to release it in the water, instead of dragging it up on the bank and then yanking the hook out, and kicking the fish back into the water. Remember every fish you kill, is a fish that won’t make it to the spawning grounds. If this happens repeatedly, everyday, by 50% of the people, then it could have a negative impact on the future runs, which in the long run will effect you. So respect the fish you foul hook, it’s not their fault, and they need to be release unharmed.

Here is a pic of Matt sitting in front of 12 of the Sockeye we collected today.

Sorry it took so long Donnie. But it has only been 3 days, not 5.

While sitting in the Yakutat Lodge this morning, I got some info that Sockeye are arriving on the high tides 🙂, and then vacating as the tides are receding 😦

.There are a couple of fishermen staying in the cabins, at the lower end. I overheard them saying they were getting their limit of Sockeye in the mornings, for the last 3 days. So the report is not to bad, but they are still more than two weeks late. I don’t know if the ocean conditions are affecting the fish this year, or if the outside temperature changes are having an effect, but I know the fish are coming later and later every year since I have been here. Got another big ling cod the other night, on the new boat. Here is a good pic of it. Motor is running rich. Putting new plugs, and alittle adjustments, should do the trick. 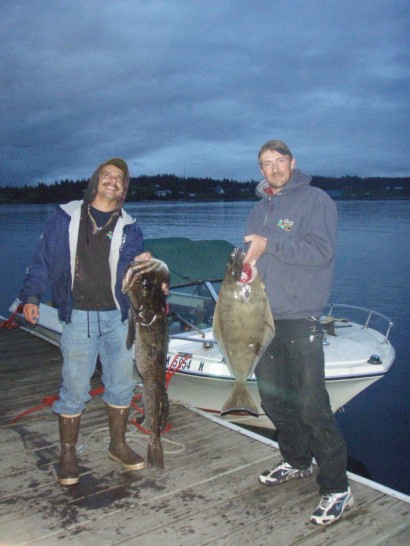 I will let you know if the Sockeye situation changes and gets better. Also I know some Kings were caught in the area of Doggie Island yesterday. All the fish hit while coming twards the area of of Canoe pass, and they were using herring, a 2 oz. ball of lead, and they were at 37 pulls. Five fish in two hours, not to bad.

Well we tested the fish catching abilities of the boat today, and it was a winner. Me and Amanda took a couple of our friends from the Yakutat Lodge out last night into the bay. We used jigs for Halibut, but came up empty. So we threw on a half a herring along with the jig and caught one heck of a Ling Cod. We also got into a 75 pound skate, that took a good 20 minutes to bring up. As far as the Situk goes, the Sockeye are not showing up at all. I talked to two fisherman that went to the lower end of the river this morning, and there information showed there are no fish in the system yet. The commercial nets go in at the mouth of the river tomorrow at 6 am, so that means if the fish are starting, there won't be any sufficient numbers of fish until the nets are removed on Tuesday at 6 pm.As of now though, there is nothing coming. I haven't heard of anymore reports of Sockeye jumping in the bay either. So I don't know what to say about the run of reds this year, I hope they show up better than the Steelhead did this year. There are still a bunch of Steelies hanging out in the lower 3 miles of the river, they are drop back fish waiting to go around the weir at night, and head back to the salt for another run next year. I will keep updating in hopes of the arrival of the Sockeye. Here is a pic of the LIng.

Well the boat worked very well, and me and Amanda will test out it's fish catching abilities tomorrow. The sockeye are still not in the river yet, so all of you that are coming up later will have good fishing. The  commercial nets go in the river on Sunday, but the subsistatnce nets have been out for some time now, and they are not getting any fish, as of yet. The weather has been nice today, but we just finished with five days of rain, so it was a real nice day today. I will let you know if we do any good in the bay tomorrow.

Here is the picture of my new boat. I am launching today for the first time. I will let you all know how it goes.