Well the Sockeye are in the river, and the halibut in the ocean are biting, and also the kings in the bay are on the bite. All species are on the attack, and it’s time to show them who is boss around here. I have been out a few times this last week, but the Sockeye were still in the lower mile of the system. So this meant that we had to row for 13 miles, to be able to fish the last one. This is a bit of a grind, and those who have seen the river already, would prefer to just walk up to the fish, but the rain hit two days ago, and just finally stopped today. If the past shows us anything, this means that the Sockeye should have made a hue push up river. The Steelhead are virtually out of the picture now, and it looks like our final count may be under 6,500. That is pretty low from what I have seen in the past 10 years at the Yakutat Lodge.  Also I have been given the news that the King fishing is open in the river as of right now, and they will determine if it will stay open depending on the numbers through the weir. So far there have been some Kings already passing through the weir. I have some pics from the last couple times I went down, also some Halibut and Ling Cod pics. 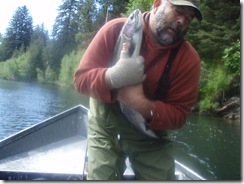 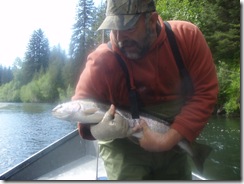 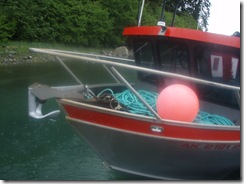 Also some pics from our lost guide Ryan. He is down South catching Red fish!!!!

Keep it it up bro. Good looking fish!

Good luck out there;