What can I say! Another banner day on the creek I love so much. I started out early this morning, and got into a fish right off the bat, but LDR got me again. (Long Distance Release). I did not see many fish at first light, but then 3 nice Steelies shot up into the run I was fishing, and suddenly there were three fisherman on top of me. Two of these gentlemen I knew, and they promptly left the area to me. The third guy, not knowing me to well, fished the wall I had run the fish to, so I did not get any of those particular fish. Just then my buddy’s Damon, and Bobby came up from a lower hole they had been fishing all morning. The report was hopeful, with 4 fish hooked, but the bank was empty, (more LDR’s). As we talked about the mornings events, a nice little chromer decided to pull up in the wrong spot for a fish when we are standing around. I was able to hook and land this nice chrome fish, but it was fouled and released. We headed down river, after harassing this fish a bit more. Throughout the day, Damon and I were able to hook up with around 17 fish, landing 5. Bobby had hooked up earlier in the day, but left early, and Damon and I ripped em’ up. We had a low percentage of landed fish, but better than what the rest of the people we saw today. Hoping this next week will bring a bit of rain, and more fish into the system. Got some good pics today, and good vids. Also I forgot to post 2 days ago, so here are the pics from that day also. I was in and out in less than 30 minutes two days ago. I think I made around 15 to 25 casts, hooked four, and got two, and went home. Nice morning!! 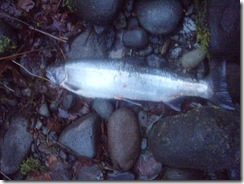 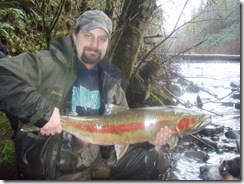 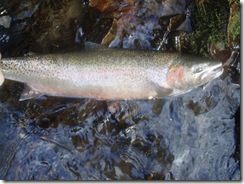 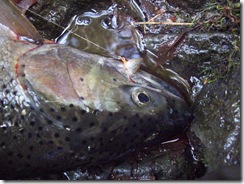