Well it took me awhile to get off the couch and really go out fishing.

Today I went down to the Oregon coast to seek out some bright Coho, and Chinook Salmon. I found a bunch of them. We fished the Trask river, just this side of Tillamook, and the fishing was great for the fly rod. I went with my buddy Steve, and again I had to show him how it was done. Steve spotted the first fish of the day, on a quick stop along the side of the road to pee, he looked down and saw two nice Chinook. We got our gear together and went in for the slaughter. It took abit of time to get things in order and to start getting into the rhythm needed to successfully fish. After about 15 minutes worth of warm up time, we started hooking up. I got into four fish in the first hour, and Steve hit into two. That was the last I heard from Steve almost the rest of the day, but I had just begun. We headed up river, and found another location, where we could see fish. We got the gear out again, and now it was really time to start hooking up. In the next five hours, I hooked approximately 20 fish or more, landed about 11, and Steve touched one, and got another one to the bank.  Tough day on the Steve man!!!. It was a great day, and the best was the 35 pound Chinook on the 8 weight fly rod and 10 pound test. Here are the pics from today. Steve is holding the one that he was able to bring to the beach, the rest are the ones I talked into giving up. We did not retain any of these fish, for they were all natives. 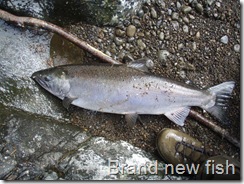 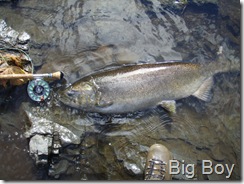 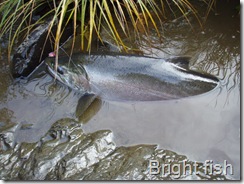 Good luck out there!!

1 thought on “Silvers and Chinook on the Fly”