Today was a bit wet, but there were a few fish to be had. I got a line on some Natives entering the Trask river system, and decided to give a shot today. Steve and i headed out at 4:00 am and arrived in the dark at 5:30 am. The first hour was slow, but with an indicator and a micro jig on the fly rod, I was able to get into a nice Native buck. I hooked up again about an hour and half later, but the button came off. Steve was not on today, and never felt a fish, but that happens to the best of us. On our way down river, along the road, we saw a spey rod fisherman giving it a go. Steve saw one cast and said â€œLooks like no action to meâ€, I said â€œ Hey you only saw one cast, he may get one anytimeâ€. We stopped fifty yards down and took a look. We thought we saw a fish, so Steve headed down to get him. â€œIt was just a stick!â€.  While he was complaining about the stick, I went up the road to see if the Spey rod was working out. As soon as I got a view of him, I saw the hook set. Running down to get a pic, I was able to get a short video and some great pics. This was about a 13 to 15 pound Native egg wagon. Measured out at 33 and 1/2â€ and chrome as they come. Real nice fish. I did not get the fisherman’s name, but if you read this please leave a comment so I can get your name, and good luck to ya. I think I am going to pull out my old 14′ rod and see what I can do. It has been over 20 years since I fished with it on the Deschutes. 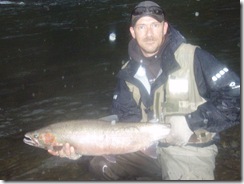 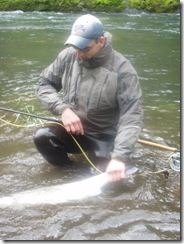 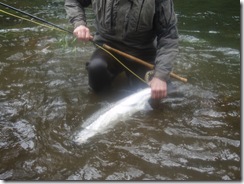 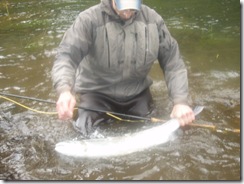 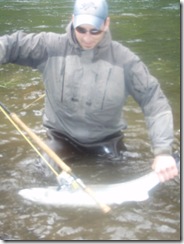 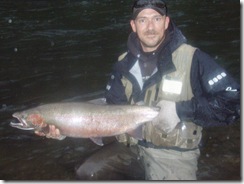 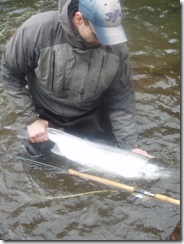