Today was a great day on the creek. A friend of mine, “Steve”, went down to the creek on Saturday, and saw no fish. The reports he got from the other fisherman, were bleak at best. Seems as though the fish I had in front of me on Friday, all went up river in a hurry.

My experience on Eagle Creek over the last 20 some years, has been that these fish run in waves, until sometime in late March, when they seem to stack up more and hold all throughout the top mile of the creek. So with this thought, I had a feeling that today was going to bring in another group of fish. I happen to be correct!!. Also the crowds from Friday and Saturday, had been discouraged enough to either stay home, or go to another river. 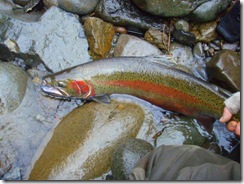 When I arrived at the creek today, there was only one other car in the lot. It was a familiar car to me. If you remember a fisherman I talked about 2 weeks ago, “Tom”, whom I had met at the river, and later got together for a day, and did some fishing together. I was happy to only see one other car, and to know that it only held one fisherman. I headed down with high hopes of a good day of fishing.

The first hole held only one fish, that left in a hurry, but just 50 yards down stream, under a Cedar tree, lay 3 nice fish. I was able to liberate some limbs from this tree, and open a casting lane to these fish. First cast in got a bite, and the fight was on. I was standing on the root of a Cedar tree, with about 6 feet of water underneath me. I did not think about what I was going to do if I hooked up under this tree. So what I did, was use the pressure from the fish to hold myself up and balance along the root until I could jump off and get back on the bank. It worked, and I landed the first one. I went back to the root, and 3 casts later, again I was hooked up, and I used the same system to get across the root and to the bank. I also landed this fish. “Then there was one!!”.  It took about twenty casts to this fish, and it was on again, but this fish got me. When I tried to use the pressure to balance with, this fish turned around on me and almost through me back into the water. I got luck, and was just able to keep my balance, but the fish was able get slack, and he was gone. I went down to a hole called the “Log Hole”, where I got into 2 and landed 1 nice fish. 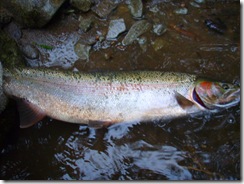 Moving on down the creek, I encountered several fish that I was able to get into. I landed another 2 fish, and released them. I came upon Tom, standing in one of my favorite spots on the creek. I was glad to see Tom had purchased a Fly Rod, and seemed to be pleased with it. He told me that he had hooked up on Wednesday, but quickly lost the fish. I asked how he was doing today, and he had landed a native fish,(That I consequently hooked and landed also 20 minutes later). I was able to spot a couple of fish laying in the tail out of the hole he was fishing, and he went to work on them. I walked down about 30 feet to this rock wall that I really like to fish. I was hooked up in just a couple casts, and I landed this nice little male. I was able hook and land another fish just minutes after the first one, it was the Native Tom landed before. Then came the “YeeHaaww” from Tom, and he was hooked up with a nice fish. It was a great fight, almost got rapped on rocks, but Tom controlled the fish beautifully, and landed it like a pro. It was great to see him get em’ on the Fly Rod! After this, I hooked with 3 more fish and landed 2 of them. So it was a great day to be Fishing!!! 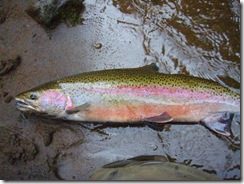 Hey Donny!!! Where you at brother!??? Heard nothing in a while. Thought you were coming down. Let me know!! Also Pete Durney's friends,,, where you guys at??

Good luck out there!!

1 thought on “They just keep on coming up.”